Últsje Jellema started keeping racing pigeons in the 60s. When son Jelle was barely able to walk, he could often be found in the lofts with his father.

The spacious yard on the Pepergaweg in Steggerda, adjacent to the Lindevallei nature reserve, is an ideal place for a pigeon enthusiast. Nowadays there is almost a nuisance from birds of prey, but that is taken into account here: “If the hawk is around you don’t need a flag or something like that to keep the pigeons in the air. We have noticed that they they take their daily laps mainly above the built-up area. The pigeons also seem to take it into account themselves. ”

Until the mid-80s, the program flights were played fanatically, with the best results achieved in the 1-day long distance races. From around 1985, the overnight long distance is targeted, grown and played and selected. That is done with the own pigeons who had already shown that they had capacities on the heavier flights. In addition, pigeons were obtained from Piter Beerda from Ter Idzard who flew formidably in the 1980s. In 1984 he became champion of the Friesland department with only yearlings. With these own pigeons plus the pigeons from Beerda, a close stock has been built up in recent years that is handled with great care. It is therefore true that our basic pigeons are closely related. This makes our pigeons also very suitable to cross with other breeds, this has also been shown in other lofts. We also had success with the contribution of pigeons from Mr Akkermans from Nieuw-Vossemeer and two fantastic breeding cocks (the brothers 584 and 585) from KJ Dijkstra from Wapserveen. The crossing products of these pigeons with our own strain have produced great racers. We only feed back the very best crossbreeding products on our own kind of pigeons, which can also produce good racers.

Only the very best racers are used for very close inbreeding, mother x son or father x daughter. These inbreeding youngsters are only used for breeding.
They are then used to cross or we put them against a different line within our own strain. 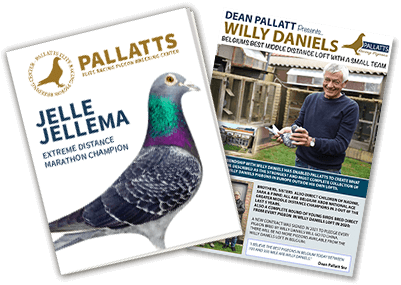